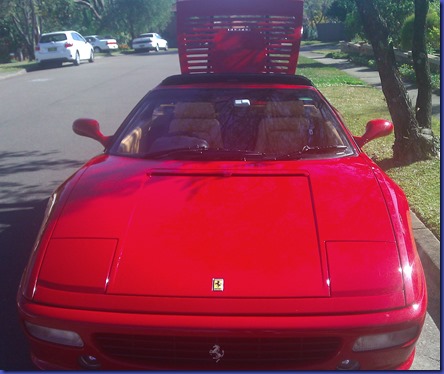 Another year of ownership of the F355 has come and gone. It’s therefore time to do an update on what happened in this past year. But before we do that here’s all the previous updates for context:

The sixth year they say is sugar.

So when we left last year’s update the F355 had decided that it no longer wanted to start. Basically, I’d turn they key, the dashboard would light up but no crank. Thought that it was either the alarm playing up or the starter motor.

As per usual, I contacted al DiMauro from Racing Red to get this thoughts and he suggested that it was most likely the starter motor. Now because the car was beached where it was he paid me a visit and removed the starter motor, took that away and had it reconditioned. Thoughts were that after all these years, a good clean up is what it really needed.

After a week or two Sal was back with the reconditioned unit and I was away again. Unfortunately, a few weeks later the same problem began to emerge. Not quite as major, but starting the car was still not as reliable as it could be. By then the car’s annual service wasn’t far away so I delivered it to Sal for him to work his magic. 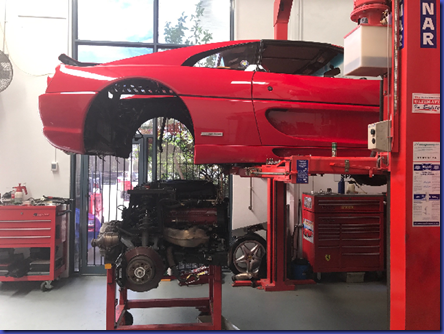 It was also time for my second major service where the belts have to be changed. This process requires the engine to be dropped out of the car to allow access. 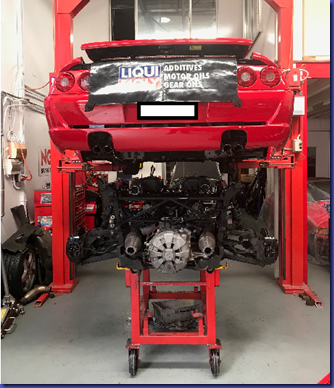 One of the things that Sal noted was that the existing ceramic catalytic converters were beginning to crack and would need replacing soon. 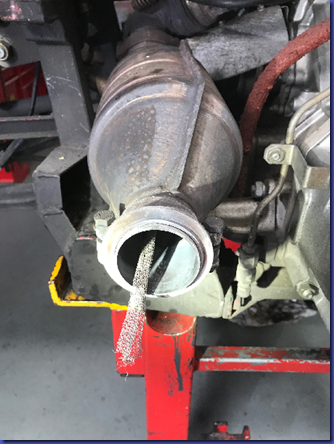 This is simply because of their age (going on 22 years now). It wasn’t something that required immediate attention but would do somewhere down the track. I might look at doing the replacement of these at next year’s service. The cost for two new converters is going to be around the $3,000 mark.

The one thing that I decided to have done during this service was to get the rear bumper fixed. A few years ago I carelessly reversed into a street sign. I then tried to repair the damage myself and I thought I did a fair job, but what started happening over time was the paint I applied started to age and change colour and the repairs became quite noticeable. It eventually annoyed me enough that I polished it back and simply left it until the next major service to repair. The repaired result was immaculate, you can’t even notice it!

Sal couldn’t fault the starter motor and with the service complete and two new rear tyres, I was back on the road again.

All proceeded well for another three months or so and the starter motor began to play up again. I’d turn the key and again I’d get no crank. My biggest concern was stopping the car out somewhere, say getting fuel, and then it wouldn’t start. This didn’t seem too likely as the issues seemed to only appear on a cold start, but you never know.

After another month or two of this happening off and I on I decided that changing the starter motor was the next step in trying to resolve the issue. I therefore took the car over to Sal (luckily it started) and he changed out the starter motor there and then with a new unit.

Since then, the F355 has had an issues. So it turns out that it was the starter motor (most likely the solenoid) that was my problem.

Thanks to Sal DiMauro from Racing Red again for this assistance with resolving the issue and servicing the car again and keeping it such great shape for me to enjoy.

This year was always going to be more expensive because of the belt change service, two new rear tyres plus rear bumper repairs. Additional costs were also incurred by the initial attempt at refurbishing the starter motor and then replacing it entirely. This meant that repair costs were twice what the annual average would normally be but most of that was expected in necessary repairs. If I look back to year three of the car’s history when I had the last major service, the annual costs are about the same.

Interestingly, even with the time the car spent off the road due to start motor issues I have travelled more distance than ever before, over 10,000 kms this year in fact! That is about a 40% increase in travel distance from the previous year. The car is fast approaching the 78,000 kilometre total distance travelled representing about 45,000 of distance that I have put on the car in the six years now that I have had it.

I went to the Bathurst 12 Hours this year and drove to and from the track a few times and I have been on a number of nice long runs as well which explains the additional distance.

1. As always, a good mechanic is worth their weight in gold. Sal DiMauro from Racing Red has always solved any issue that has cropped up with the car, and how well it is running is testament to his professionalism. I couldn’t enjoy the car as much as I do without his help.

2. Life is so much better when you get the ding fixed that you put in the car.

Obviously the issues with the starter motor not allowing the car to start. The initial issues were worse because the car failed to even crank but once the problem became obvious it was just a matter of eliminating the issues. IN the end, as typically it does, it took a few goes to isolate the problems but now with a new starter motor everything is back to normal.

The car has run remarkably well. This year I’ve really felt that it is purring along when I drive it. That probably explains all those kilometres that I have put on it this year.

Apart from driving the car the highlight this year for me was being part of Targa Tasmania. I details my experiences here:

During this time I was lucky enough to be co-pilot on a 458 Italia and came away thinking that I should probably get one to add to the stable. Thus, the search is on.

I’ve given up closely watching prices on cars but it is remarkable to see that F355’s are now selling for the $300,000 mark. I saw one go for $360,000 a while back. It is also remarkable that these prices are currently being maintained. Of course, there is plenty of variation in the asking price of cars but the current value is more than doubt what I paid for my car back six years ago!

I’m not worried that my car has probably more kilometres on it than most F355’s. I know that what really matters is the service history, which is good. However, there is bias here in Australia for low kilometre cars and that may affect the value but a real enthusiast I figure will appreciate that a car driven regularly is worth more and is unlikely to have as many problems as a ‘garage queen’.

I’m not interesting in selling the F355 and I also believe that in the long run the asking price for these cars will continue to climb. Let’s see what another 12 months brings on this front.

Another great year with the F355. Once the starter motor issue was sorted things have been grand. I am also happy that the rear bumper is now repaired and I don’t to look at it every time I get into the car. I can’t tell you how annoying that blemish was and how often it reminded me of my stupidity. Now, no more.

I’m also happy that the value of the car continues top rise, which confirms my initial belief that this was the car to buy.

I enjoyed some great events like the F1 Grand Prix in Melbourne as well as Targa Tasmania, which has convinced me that I need to get a 458 Italia. Now that’s a project I can sink my teeth into for the coming year.