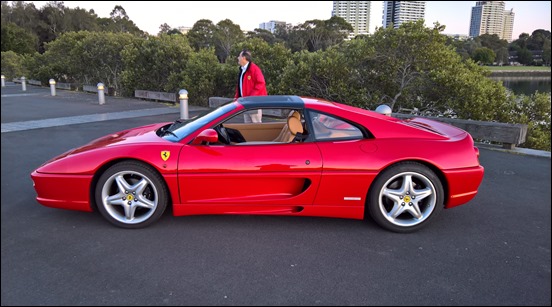 Here’s the summary of another year’s ownership of a F355. You may want to catch up on previous episodes:

The seventh year they say is woollen

I am happy to say that this year there has been no major issues at all. The biggest one was the replacement of the intermittent wiper timer, which was taken car of at the annual service. A very trouble free year indeed.

Total expenses for the car this year were around the $8,500 mark. The majority of that cost is the comprehensive insurance, which again was around the $3,000 mark.

The car is due for an engine out service in December 2020 (i.e. not this year), so it is time to start saving because I’ll probably take the chance then to get the springs re-conditioned and the geometry reset. At this year’s service I’ll need to address the recent pain flakes that have started to occur at the front of the car. That will probably mean removing the front car and getting the whole thing resprayed. We’ll see.

The car has just crossed the 80,000 kilometre mark and is now heading towards 90,000. I have enjoyed some really great runs this year including to Bathurst and Mudgee.

As I was returning home from a drive and making the turn off the main road I noticed some large obstruction on the road. In retrospect (which is always great eh?), I should have kept going straight on, made a left and come back around avoiding the object totally. I didn’t however and the object turned out to be a block of course concrete, which I only identified as the car was passing over it. Due to it’s size and low clearance of the nose I heard a loud scrape as I passed over it. The good news is that it didn’t do any other damage to the under side of the car or the mechanics (which it could have) but it did leave a very nasty gouge under the nose. The good thing is that you really couldn’t see the mark. The problem is, it was quite large and I knew it was there.

A few months later I finally got around to at least painting over the mark so it won’t annoy me as much and one day I’m going to need to get the whole bumper re-sprayed. However, until then, the patching is fine.

The car has performed pretty much faultlessly this year. It has been a joy to drive at all time, especially on country roads. I always look forward to driving it.

The value of F355’s has come off a little in the last 12 months but still remains around the $260K – $280K mark, depending on the model. I expect it to continue to stay around that mark.

Another magic year with the F355. It is magic to drive every time and I’ve been lucky enough to do some great drives this year. There are few maintenance issues on the horizon, with an engine out service being the main one in about 15 months. I wonder whether I’ll cross the 100,000 kilometre mark by this time next year? Time will tell!