Here’s the replaced clutch plate, which appears to be original (i.e. the only one the car has had after all this time). Can’t complain, about 25 years in age and around 90,000 kilometres in travel.

You can see that it is worn by looking at the ridges and noting that the many are missing as you go around the plate. These missing ridges indicate that clutch material has been worn down. You’ll also notice that the plate tends to wear on the outside. This is expected as the plate grabs on the outside first.

The other interesting thing is that the plate isn’t worn evenly. As you see above, in some places it is badly worn (left) and in others (right) it isn’t! I’ll have to work out why that might happen, however, all in all the old plate was pretty knackered, which you expect after all these years.

Above is the old clutch release bearing that was also replaced. The replacement is an older OEM style release bearing mainly due to it’s reduced price and availability compared to the upgraded model. The upgraded version is over twice the cost currently of the OEM version, without a lot of difference so I’m told. Main point is, I needed a new bearing and now I have one.

The inner ring is the actual bearing that spins and makes contact with the clutch springs when the the clutch pedal is depressed as shown above. Again, being the original bearing, it has had a good life and is beginning to wear and not move as freely as it did initially. Unfortunately, the bearing itself can’t se serviced so a new one is in order.

One of things that I struggled to understand was how the clutch release bearing was actually pushed onto the clutch springs. This can be done either using a mechanical arm or the modern approach is to use hydraulics.

What I worked out initially was that with the F355 it was hydraulic. You can see the two hydraulic lines for the clutch at the top of the housing as shown above, one of which goes off to a bleed valve. What stumped me for quite a while was how it got from here to moving the actual clutch release bearing.

It turns out that those lines that go into the housing go through to the mounting frame as shown above.

The support flange (part number 168589), shown above, has two matching holes. that align with those on the casing.

You’ll see that the support flange is stepped and at the top of that step are two more holes where the hydraulic fluid can flow as shown above.

Onto this flange will fit the clutch release bearing, which has a number of seals to keep the hydraulic fluid from leaking out during operation. It is important that all these seals are good, otherwise you’ll get fluid leaks and increased wear.

I found these three videos to be a handy reference for the whole change over process:

The passenger’s rear hyperblock (part number 114812) or chock absorber mount, as you can see above, also needed to be changed. It should look like:

and is found here:

Apart from this, it seems that there is also a problem with the shock absorber actuator (part number 158732) which sits at the top of the assembly.

Unfortunately, that part is not available, so it will be ordered in for my next visit to Racing Red.

This fault actuator also results in a yellow suspension warning light to be displayed on the right hand side of the dash as shown above (the red light above it is just the seat belt warning light telling me to buckle up), which is on now all the time. I must admit that this is annoying, as I can’t fully relax while driving with a warning light on the dashboard. However, it isn’t a show stopper and will be fixed, so I’ll just have to deal with it for now! Still annoying though.

So Liverpool Exhaust still have the cats to be re-cored. They said ‘maybe’ before Christmas, otherwise, in the New Year. Again, annoying but I appreciate this time of year is busy and I’d rather have them done right than rushed. For now, Sal was replaced the missing cats with some temporary straight pipes to tide me over. Lucky that he had some he could ‘lend’ me.

You can see some other parts that were changed above.

Two cam belt tensioners as shown above (part number 167464), one on either side for each cylinder bank.

Two timing belts as shown above (part number 184986). Again, one on either side for each cylinder bank.

Two inside boot covers (part number 70006021/A) as shown above. These were actually replaced back in 2013. You can read about that here:

The reason the boots fail is because of the heat generated by the engine over time. This is supposed to be mitigated by the heat shields:

which are not really long enough to fully protect the in board boots. Sal has now extended these heat shields out further to try and prevent this happening again, however seven years isn’t too bad for the boots considering how hot the engine does get.

If you haven’t been following along with the whole story, back in May 2014 I reversed the car into a pole in the middle of the street:

Unfortunately, it seems the suspension springs can’t be effectively re-conditioned because if you do they will sag again but faster. That means, that at some point down the track, when they get really bad, I’ll have to replace them. For now, they are fine so I’ll leave that for another day.

So, what still needs to be done?

Hopefully all these can be sorted in the New Year and I’ll be fully operational again (without that annoying dash warning light). However, it is good to have the car back again and I can tell you that the new clutch makes a HUGE difference. The car is so much lighter and easier to drive. Changing gears requires almost no effort now! It is always good to notice a positive change after investing all this money and time to get it fixed.

So another annual service is pretty much complete. Only a few items to finish up, hopefully in the New Year. Thanks again to Sal from Racing Red for sourcing all the parts, lending me some spare cats and getting the job done so quickly. Look out 2021, here we come!

I followed up with Liverpool Exhaust about getting cats re-cored but no news on how much or when they can be done it seems. Hopefully, I’ll find out on Monday whether these can be done.

Unfortunately, I received news that the clutch release bearing is worn out. Even worse, it turns out that a replacement may prove hard to source.

Here’s what a clutch release bearing does: 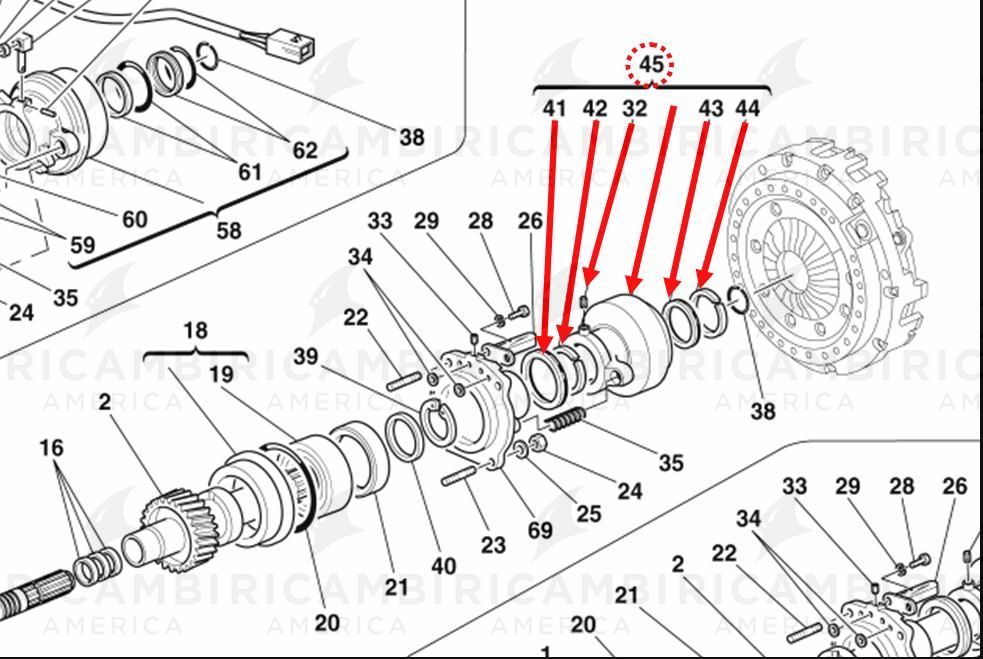 The original part number appears to be 168594 but has now been superseded with an upgraded version which is CRB355MS.

Unfortunately, it appears that neither the upgraded version or an original replacement is easily sourced. That means I’ll have to wait and see how long it takes to get either in.

I once again dropped the F355 off with Sal for it’s annual service. It is going to be a big one this time with:

– the belts to be changed

– springs to be re-conditioned

– cats to be re-conditioned

As it turns out, one ‘other else’ is going to be the CV boots which have ruptured due to the heat of the engine:

These were last changed back at the annual services in 2012:

so they haven’t done too bad considering that’s 8 years of driving.

Also, one of the rear shock absorbers has a leak from the top of the mount, which will need looking at.

I’ve taken the cats away to Liverpool Exhaust to get them re-cored, per a recommendation. Problem is that they are pretty busy and guy who normally does the job is away at the moment. I’ve left the cats there and I’m awaiting an update on any progress and whether they can do the job. Fingers crossed they can as it would be a pain to go all the way back there simply to pick up the cats and take them somewhere else. We’ll see.

So that’s the status right now. The car is with Sal for the annual service. The engine is out, the cats removed and away for re-coring. I’ll post more when I know more.