Got the news that the replacement leads had been attached and F355 was ready. So made my way over to Racing Red to pick up the car.

I was in two minds as to whether to have it return via a tilt tray or if I would drive it back across town. In the end I opted for the drive and hoped that all would be good and I wouldn’t breakdown somewhere ‘inconvenient’ like the Harbour tunnel!

Turns out that 3 of the leads on the left bank (5-8 cylinders) were faulty and needed to be replaced. The others were tested and came up all good. Interesting that 3 leads on just one side were bad, given that they were all the original leads (i.e. 20+ years old). It may be a good idea to get the reaming leads at the next major service just to sure. We’ll see.

Sal assured me that everything was fine so I rolled out onto Sydney roads for the 45 minute or so drive home. Now, typically the problem started to occur about 30 minutes into a drive. At this point I had just cleared the tunnel and was heading onto the expressway. So far so good.

The car arrived home in good order and with no signs of the stuttering problems previously experienced.

The only problem was that the car was filthy and badly needed a wash. So I took it out for a normal run early in the morning to test it further and did a few minor things. Interestingly, in some situations off the mark the car still seems a little stuttery. Not every time mind you but I could certainly notice when it happened. When it did, the exhaust didn’t ‘cackle’ like it used to, which seemed to indicate that here was unburnt fuel was travelling through the exhaust. No, this felt like the car didn’t have enough revs to get off the mark.

This of course could be something as simple as my paranoia and memory loss as to how the car ‘used’ to drive. It could also have to do with the fact that car is tuned slightly differently after the leads being changed. Again, nothing major or totally unexpected, but I’ll need to drive it some more before I can really make a judgement.

The only other issue that surfaced was the 5-8 Slow Down warning light on the dash did come on momentarily. Now this could have simply been because of a bump in the road or perhaps even that the ECU or probe are failing (as again these are the original 20 year old items). At least if it starts happening more regularly I’ll know what’s going on given my previous experienced with the 1-4 Slow Down warning!

Aside from these two minor issues the car drives really well at speed. It feels somewhat different from before but feels very strong at speed which is reassuring. This kinda re-inforces my belief that car is tuned for for this end of the spectrum which is fine with me!

I spent the rest of the morning giving the car a good wash and returning it home. Again, no issues on the trip back. Given that tomorrow is a holiday here, I think I’ll take the car for a freeway blast and see if I can notice any of the ‘coughing’ that I did before at high speed. I don’t think I will but hey, it’s a great excuse for another drive given I have been deprived of late.

So there you have. Finally, I have the car back and it is clean. Fingers crossed that those minor gremlins I experienced today don’t resurface and I can enjoy an uninterrupted period of drivability! 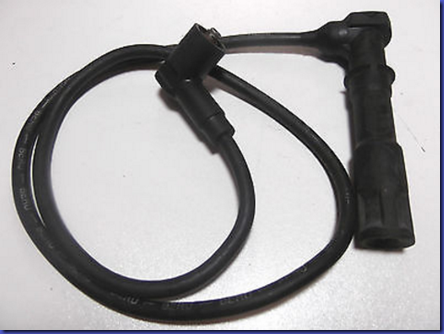 The report on the F355 is that a number of HT leads are faulty and need to be replaced. The parts have been ordered and are on their way.

The leads, like the spark plugs, are something you never know how old they are when you buy a car. Are they original? Or maybe they were replaced at some stage, but when? Something interesting to consider if you are buying any car.

I did have a car many, many years ago that exhibited similar problems to the current stuttering problems on the F355. It got so bad that I have driving up hills using the choke (yes, it was that old it had a manual choke).

The day that it was scheduled to go in for repair it wouldn’t start, So I had to get towed being another car across town, which as an experience and a half. The funniest thing, only on reflection now of course, was that upon arrival we parked the cars outside the location to work out where we needed to go. Upon returning to the car to move it, I failed to insert the ignition key into the steering column and unlock the steering. As soon as I turned the wheel the steering lock kicked in and I began spearing across the road like a sling shot at maximum velocity.

I jammed the brakes on and luckily didn’t hit anything but I certainly gave the driver of the towing car a severe case of whiplash and no doubt made their car a few centimetres longer! Talk about panic stations.

So, fingers crossed that the leads resolve the problem and in any case it is about time that they are changed given the distance I have travelled since purchase. I can’t wait to get back behind the wheel.