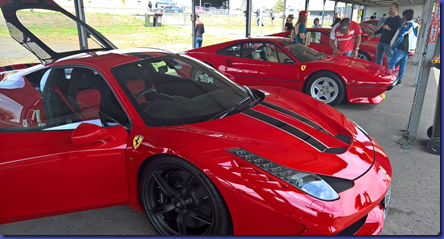 Yes, I know, but things have been rather busy, so now it’s time for an update.

The F355 went for it’s annual service. No issues detected but getting there and back through the peak hour traffic is to say, at the very the least, a disconcerting experience. The car performed flawlessly but you can feel that it doesn’t ‘like’ stop start traffic at all. It also becomes very tiring to drive, given it is a manual. However, the car arrived and returned without any issues. Next year’s service will bring with it the need to change the belts but I’ve been there and done that one before.

Now of course, right after being serviced, the 5-8 slow down light has started to appear. It does so about 30 minutes into a drive and then about 10 minutes later disappears, not to return for the remainder of the trip. Annoying.

My guess is that the 5-8 ECU needs changing as I have already changed the thermocouple on that side. The good thing is that when the light comes on it isn’t causing the engine to go into ‘limp’ mode. If and when it starts doing that, I’ll have to change out the ECU. Until then, I’ll live in the fantasy world of ‘it will go away’.

Apart from that, the car is running like a dream. At the high end, it is such a pleasure to experience. Makes every dollar I’ve spent on it totally worthwhile.

I also got the opportunity just before Christmas to give the car a really good clean and polish. I was finally able to attack the car with the dual action polisher I had bought a long while ago. I noticed that there was some paint transfer onto the polishing pad from the passengers door but not from any other panel. Interesting. Maybe that panel has been re-sprayed after the rest of the car? Anyway, it was the only panel that this happened on (phew).

I also decided to take the polisher to the rear bumper and clean up the ‘bodge’ job I had done after backing into a pole a few years ago. Even though I thought I’d done a good job of repair at the time, what had happened over time was that the touch up paint I had used had changed colour and was become quite noticeable. So I decided to take the most aggressive polishing pad I had and cut it away and see what I was left with.

In the end I was able to match most of the area, however I also burned through (as expected) the added top coat of paint, revealing the raw white fibreglass that I had sanded the crack back to. It felt better to have the whole area cleaned up but still annoying that it is there. My thinking is to maybe get some advice from an experienced detailer to see whether they can ‘bodge’ better than me. Alternatively, I was thinking about maybe using a vinyl wrap for just that small area? No sure yet. I’m going down the ‘get feedback from experienced detailer’ first route and I’ll report back.

However, there is no better feeling than being able to spend a lot of time on the car to get it the way you want it, at least on the outside. I’ve still go to do the inside yet!

So what’s the plan for 2017? Well, the next planned event is the Bathurst 8 hour in early February. I’ve been to the race for the past two years and stayed over night the first year, which was an experience to say the least. I managed to get myself horribly sunburnt and then overfill the fuel tank on my return. Ah, them’s the days.

This year, I’ll be taking part in the Meguiar’s Cars and Coffee event on the Saturday which I’m looking forward to. Hopefully it won’t be too hot as it is always a fun day. If you are around come say ‘hi’. Hopefully, we’ll also get a ‘parade’ lap around the circuit, which I have done before but would certainly be cool to do again. Mt Panorama is an truly amazing circuit.

Next up, at the end of March, I’ll be heading down to the Australian Gran Prix in Melbourne. My destination is the International Suite on the start / finish straight above the pits. Cool! I’ll be going down in convoy with members of the Club who will be taking their cars. Why would you wanna take your Ferrari all that way? Well, if you do you’ll get to take part in the Ferrari cavalcade. This is basically 2 – 3 ‘parade’ style laps around the circuit.

So here’s my dilemma. I am still in two minds about taking the F355. Sure, the track time sounds brilliant but getting the car to and from the event is what concerns me, with the major worry being traffic in and out of Melbourne. Maybe I’m just being a whimp about it? Hmm…Still thinking about what I’ll do but at this stage, I’m leaning to taking the F355 for its longest run yet!

I’ll hopefully be able to provide full details of the event here, with picture, videos and experiences. So stay tuned.

Then, two weeks after that I’m off again with Club members to the Shanghai Formula 1 Grand Prix. That will be a week of sight seeing and watching the race which I’m really looking forward to as I have never been to Shanghai.

I’ll start detailing more about that trip as we get closer to the dates in early April but it should be good.

So hopefully I’ll get some more time to dedicate to the blog and I’ll try and post up experiences from all the upcoming events, so stay tuned.