Our starting point was Zagame in Richmond, Melbourne on Saturday afternoon after travelling down from Sydney. During the afternoon, we all made each other’s acquaintance and shared the excitement of participating in Targa Tasmania 2018. We received our final briefing from Renato of Motokenetic before heading off in convoy to board the Spirit of Tasmania ferry at Port Melbourne across to Tasmania. In all there were about a dozen cars ranging from the latest 488 to more ‘classic’ 355 and 360s. Both V12 and V8 models were represented.

It had been cold and wet all afternoon in Melbourne and that continued as we parked up in Port Melbourne and found somewhere to eat before boarding the dedicated Spirit of Tasmania ferry to the apple isle along with all the other Targa participants. Our embarkation had been delayed due to the late arrival of the ferry from Davenport. This was due to the rough seas in the Tasman. Little did we know then how rough the voyage was going to be that night. 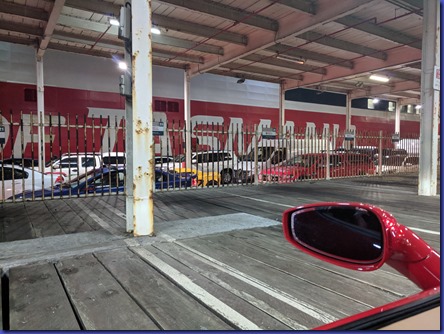 After dinner we joined the long queue of cars boarding the ferry. At the boarding checkpoint we received our tickets as well as room allocations for the journey. A short distance later we were on the ferry amongst all the cars bound for Targa. The holds where full of all makes and models of vehicles and space was tight but everyone was very excited. 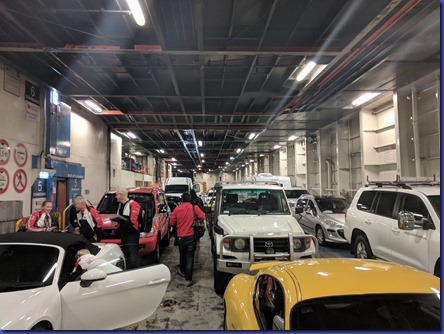 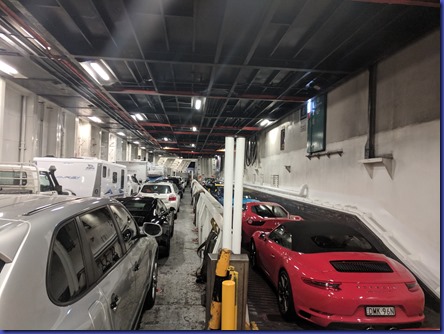 After grabbing our things from the cars, as these decks would be locked during the voyage, we headed upstairs to locate our cabin and drop off our luggage. Most people then headed to the lounge where many had already congregated. There we settled in for departure from Melbourne and commencement our of Targa Tasmania adventure proper.

The sea remained relatively calm until we cleared Port Phillip Bay at about 1 am, after which point the ferry was battered by the five to six metre swell and squalls all the way across the Tasman sea. Most remained in their cabins trying to get some sleep amongst the pitching. The more ‘salty’ types didn’t have much trouble sleeping but the vast majority of ‘land-lubbers’ spent a restless night awaiting arrival in Tasmania in the morning wondering about their own and their car’s safety in the swell.

I found myself unable to sleep in large swells, feeling the constant pitching in unfamiliar and somewhat claustrophobic surrounds was unsettling. I therefore spent the duration of the night out in the deserted lounge watching endless AFL reruns and occasionally making a dash to the bathroom for a bit of a personal heave ho.

At dawn we were greeted by the announcement that we had arrived in Davenport and would soon be disembarking. Everyone once again assembled in the lounge area awaiting the go ahead to access the vehicles below decks. Many were bleary eyed from lack of sleep and tended to sway, not receiving comfort from the large swells during the night. A small percentage were fresh and unable to understand what the problem was.

Whatever the state of being, everyone headed below decks to pack their cars and head off the ferry and onto Tasmanian soil proper full of anticipation. After a brief regroup in the car park we headed off to breakfast at Raspberry Farm Cafe http://raspberryfarmcafe.com/ about 30 minutes away were a hearty breakfast and catch up was enjoyed by all. Many were still swaying from the night before on the boat but everyone was in good spirits and full of expectation as we finished breakfast and headed to the Country Club Tasmania http://www.countryclubtasmania.com.au/default-en.html just outside Launceston, which would be our home for our time on Targa. 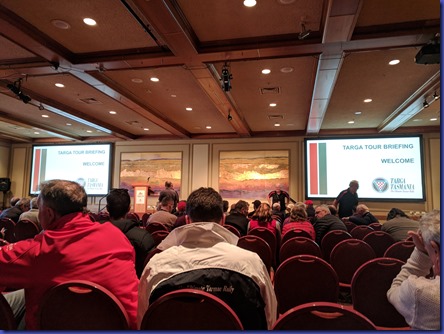 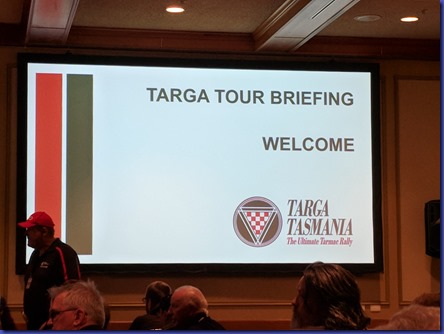 After checking in and freshening up we headed off to the drivers briefing where the officials gave us an overview of what to expect and what was required of us and what we could expect over the coming days. Our next stop was to assemble and get actually checked into event. This meant both driver and navigator details were verified, after which we received our ‘official’ Targa participants pack. This contained two number plates (back and front), a bag each, stickers for the car and basic stage notes.

It was at this point that it finally dawned on most of the navigators that they were not going to be merely ballast. There would be an obligation to provide directions for the drivers, both on and off stages. The note book contain a vast array of routes, directions and information that as it turned out would be required to navigate all stages safely and on time. With excitement building we headed off to the car park to adorn our cars with their new plates and event decals.

Attaching the decals to the vehicles proved challenging but nothing like trying to get the new plates attached to the cars. Number plates on a Ferrari are very much an after thought and typical that are installed an never changed for the life of the car. We now had to work out a way to attach both plates to the without damaging it.

Some attachment processes proved more successful than others but eventually all the plates were attached without too much impairment to the cars. The important thing was that these plates now covered or replaced the existing plates and would remain in place for the duration of our time in Tasmania.

With the excitement of the first full stage tomorrow our group headed off to dinner at Bluestone Bar and Kitchen in Launceston for a wonderful dinner and then back to the Country Club for the night.