After a restful night on stable dry land, our first full day in Tasmania dawned clear and crisp.

There was an air of excitement as participants shared breakfast in the Country Club before heading down to the car park to prepare for the first day of Targa.

In the car park we met our ‘guides’ for Targa who would be leading our group in their Golf R. The idea was to firstly have someone to follow and secondly keep the stages safe by limiting the maximum speed to around 120 kmph (yeah, right). These guys had been doing Targa for years and knew every stage like the back of their hand and were a great source of information and history of the event. Bringing up the rear would be the ‘sweeper’ in VW Amork, being the tour support vehicle that had followed us from Melbourne.

With last minute checks done, briefings complete and radios allocated we ran the gauntlet of the daily morning breathalyser and lined our cars up ready for the road train through suburban streets to the first stage. 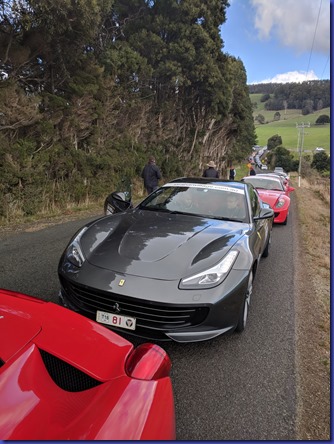 It took about 45 minutes for us to drive from the Country Club to the beginning of the first stage known as Holwell. As our group was the always going to be the second on stage we needed to wait for the larger first group to clear the start. As such, we all pulled over to wait our turn. 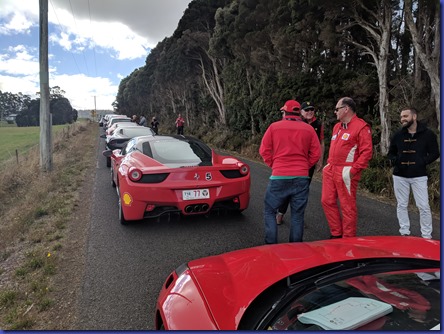 This initiated a sequence that was to be repeated prior to each stage. Upon stopping, all the doors would fly open and both passenger and driver would make a b-line for the bushes on the road to relive themselves. Every wondered why roadside Tasmanian blackberries taste so good? Now you know!

Once the call of nature had been answered, people grouped together to share their anticipation for the coming day. There were a few experienced hands who could lend some experience of what to expect. Many of course complained about how cold it was as well. Whingers!

The other commonality with these short breaks before each stage was simply the stunning scenery, because remember, Targa is typically not held on main roads!

We soon received word to start getting ready for the stage. We jumped back in cars and trickled up to the stage start lead by our guides in their Golf R. I had my stage notes book ready to assist as best I could.

Holwell is a stage of about 8.5kms. It was short but challenging with a number of locations to watch for. Our 458 rolled up to the stage start and we watched the car in front disappear in a cloud of acceleration and moments later we were off in hot pursuit.

It wouldn’t have been 200 metres before our car windscreen intersected with a large rock thrown up by the car in front. Luckily, this 458 had a protective coating applied to the windscreen for exactly this reason and no damage was sustained. However, both the driver and I used the first of what would be many choice words you don’t use in polite conversation in response to the shock.

We backed off a little, giving the car in front some room, with the aim of avoiding any more rocks being thrown our way. As we sped along I did my best to read from the stage notes and let my drive know what was coming but all the motion and rapid speed as well as perhaps the fact I had not fully recovered from my sea journey, were making me feel quite ill.

We continued to barrel along at great speed. I will also admit that I don’t make a great passenger (I’m a control freak I know) so being thrown left and right as well as not exactly knowing when the car would be breaking and accelerating, was not doing my constitution much good.

The first stage was now complete but I was certainly worse for wear. As we travelled at road speeds to the next stage, Kayena, I could feel my breakfast wanting to come up for a look at the scenery. I quickly urged my driver to pull over just in case. Nothing came up but I did have to endure the scorn of the other drivers as they drove past. Nice to know who your friends are right?

After some fresh air, I felt much better and so we continued our journey. Turns out that my so called driver buddy had the seat heaters on full as well as the cabin temperature set a ‘toasty’ because HE felt cold. REALLY? I quickly pointed out that there would be two people in the car most of the time and if he didn’t want to see what I had for breakfast he really should ensure I am also comfortable with the environmental conditions in the cockpit.

With the cabin environment now sorted, we continued to the start of Kayena. 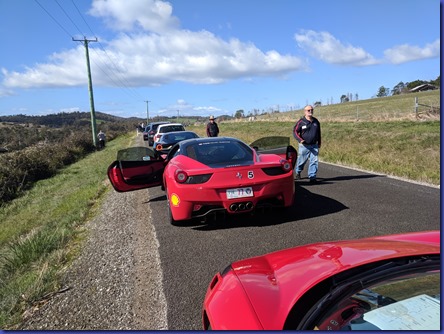 Upon arrival at the stage we once again lined up to wait. The familiar exodus of drivers and passengers to the bushes on the sides of the road repeated itself. 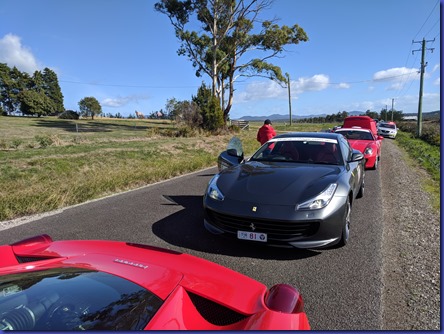 Kayena is a 7.4kms stage and was now starting to get into more populated areas.

I survived the stage but was still getting pretty motion sick with all the bouncing around, trying to read the notes, look out the window, worry about what my driver was doing and so on. It was there and then that I decided that if I was going to return to Targa it wouldn’t be as a navigator. Stuff that! 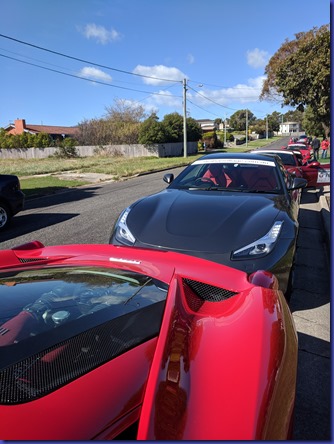 We now headed to the George Town stage that is actually run through the city centre! You have to be kidding me I though. No way. But, yes way, it is. 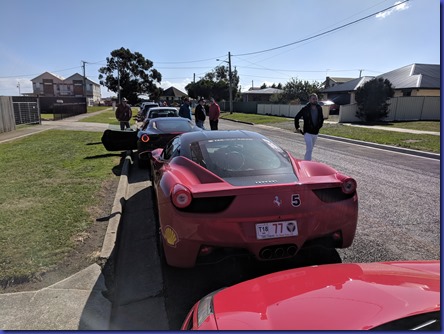 This was to be our last stage for today. After this we’d have lunch and watch other competitors tear through the town.

There was a fair backlog of cars waiting to do the stage so we stood around for a good 30 minutes waiting for our turn but when it came it didn’t disappoint.

There is something quite surreal about screaming through a pretty sea side resort town in Italian supercars at speeds of well over 180 kmph with nothing but a few pieces of tape to guide you the way to go. One good thing is that it is all flat but it is certainly tight. The 458 and driver, as usual, handled it with ease.

Although I was still feeling somewhat under the weather I did enjoy the stage. It is pretty unique and I don’t think I’ll get another experience like it. 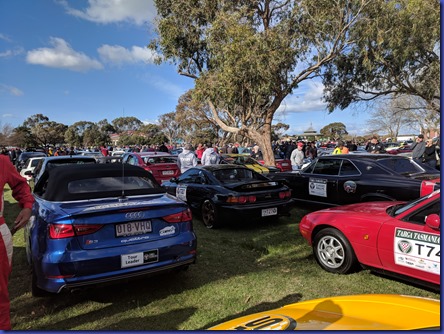 All competitors parked up in park behind the main street and then headed off to the hospitality tents for lunch. I restricted my intake as I didn’t want it coming back up on me. It was however very enjoyable for everyone to get together share experiences of this first day while watching the really serious competitors blast past. There were of course a few spectacular looses but nothing major.

It was dawning on us how special Targa is and we all remarked at how unique this event was. There is little doubt that something like this would not be held anywhere else. The really amazing thing was just how much support the locals gave the events. Every time we parked the cars up in a town to have lunch, locals descended from everywhere to have a look and ask questions. I started coming to the understanding of how special this event really is and why so many people want to get involved. 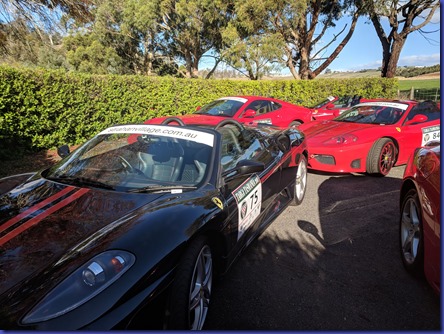 On the way back to the Country Club we stopped off to look at a private car collection as well as a look through the National Automobile Museum of Tasmania. Even during Targa, a fleet of Ferrari’s makes a scene.

We returned to the Country Club for some rest and to get ready for dinner at Pierre’s Brasserie in Launceston. On our return trip afterwards, through the deserted streets, we pulled over to refuel for the following day which would start earlier and go longer. Not something you see every day (or night) in Tasmania now is it? All bowsers occupied by Ferraris!

Our first day of Targa was done and dusted. I had almost been sick. I had decided never to be a navigator again (reading those stage notes is what did it to me) but it had been a truly amazing day. The weather had been brilliant, the scenery magnificent and company was awesome. Best of all, we get to do it all all again, bigger and better tomorrow.