Maybe Sergeant Pepper did teach the band to play but January 2, 1996 was when my F355 was first delivered to its initial owner from the factory. That makes the car 20 years old today! Happy Birthday F355. 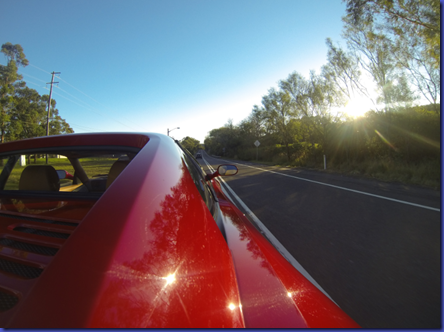 It’s been with me now for over 3 years and it will hopefully be many more. Without doubt it is still one of the best cars ever made I reckon. Looks great, performs well, drives well to name but a few of its characteristics. Those attributes are beginning to be more highly appreciated as the car enters ‘classic’ status, which is also accompanied with a rise in value.

So how do you celebrate a F355 birthday? You take it for a spin obviously! All the rego and the annual service has been taken care of for another 12 months which is always a relief. Sal from Racing Red also changed the plugs for me as I felt it was getting a bit ‘stuttery’ at low speeds. The few drives I’ve been out since then seem to indicate that this has rectified the issues.

So what’s in store for 2016? At the moment I have two major projects when it comes to supercars. The first is starting the hunt for Ferrari #2 and the second is a little bit secret until it gets confirmed in early January.

Now don’t think that I can go and throw the cash down on Ferrari #2 but you gotta start somewhere right? I never thought I’d ever own even one Ferrari, but hey, I kinda made that happen so aiming for number two is simply the next peak to climb. I have no plans to sell the F355, but one Ferrari is never enough right? Well, that’s what I tell myself to justify things.

Initially, putting the cost of the vehicle aside the current debate that rags in my head is whether a 458 or a 488. Normally aspirated versus turbo charged. Newer versus older. Hmmmm, some tough choices here. I’ll post some more thoughts up about the pros and cons of each and the practicalities for ownership of either. That should keep the posts coming for years!

Now, secret project #2 I don’t want to say too much about until it’s all confirmed but let’s just say it hopefully involves a long plane flight followed by some driving on the wrong side of the road. Look out for more updates here soon.

I admit that I’ve neglected this blog a little in 2015. That’s because the F355 has been performing so well but now I can share my thinking in regards to project #1 so there should be more regular content here very soon, so stay tuned.

Happy birthday F355 and many more.