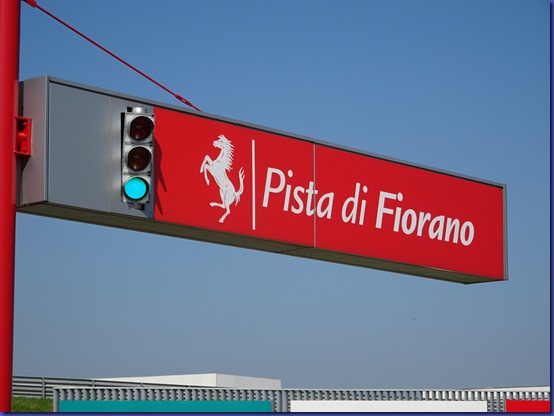 Day 2 of Corso Pilota started much the same way as Day 1, with a bus trip to the Fiorano circuit and a security check at entry. We again headed into the briefing room for some more driving technique tips.

We were also given the bad news that the cones designating the breaking point for each corner had been removed. All that was left were the cones representing the apexes. Oh boy, if I didn’t have enough to worry about already. 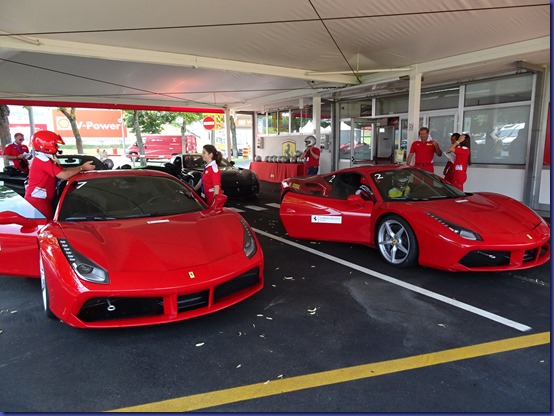 Our rotation into the cars commenced again. I was pleased to start with the 488GTB rather than the F12 as yesterday. I still had much to work on but was far more comfortable now than I was at the same time yesterday. 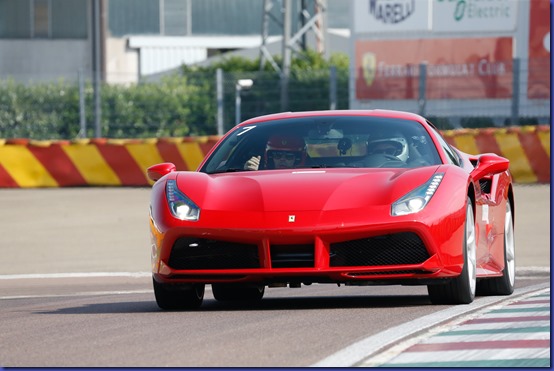 If my favourite corner was the turn onto the bridge (still hard to master though) my most challenging corner was the hair pin as it just seemed you needed to turn in when in fact you needed to wait on the brakes longer. When do wait you have to turn the wheel less and you get out of the corner mush faster. It ‘feels’ wrong based on what I am used to but doing it ‘correctly’ you can certainly see the difference. 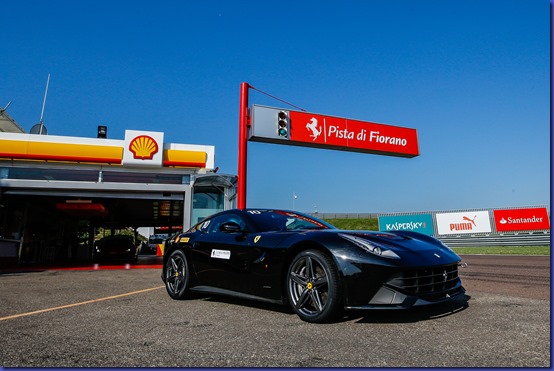 The F12 was still a handful and a very different car to drive than the 488GTB. Being bigger, longer and with the engine in the front it is a really hard car to get smoothly around the corners, especially after driving the smaller and nimbler 488GTB. However, I did feel slightly more confident driving the F12 with all the sessions I now had under my belt. My mood had changed from one of anticipation to eagerness to get out there and improve. 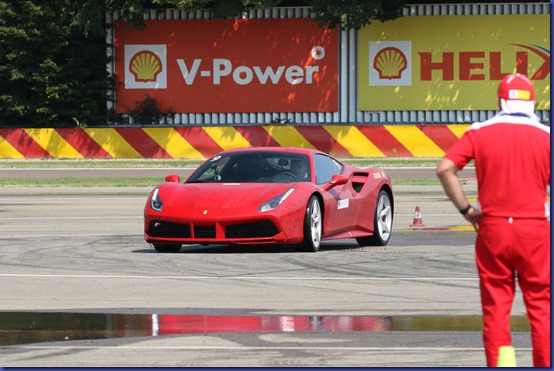 At mid morning, our group returned to the skid pan to ‘compete’ in a more challenging car control event. A small course had been mapped out with cones which included both dry and wet sections (with one especially slippery part over a painted Italian flag). We had two laps of the course with the traction control in a different setting, starting with the most assistance first. These settings are changed via the manettino dial on the steering wheel.

Each lap would be timed, with the competition being between individuals and groups. Nothing like a bit of competition to get the ‘red mist’ going. Before being let loose on the skid pan ourselves we were taken for a ‘demonstration’ ride with our instructors. Got to say that I’m glad I wasn’t doing this session right after lunch!

After getting my eye balls to stop spinning I awaited my turn behind the wheel. If there was ever a chance to really throw a 488GTB around, now was it and I can tell you it was a blast. Tight corners, followed by a short straight, then hard breaking and through the wet all with the clock ticking was beyond fun. Gas, gas, gas, brake, brake, brake, gas again… was the standard instruction we received via radio from the instructor.

Again, it is amazing how much difference the electronics of the car makes when you throwing it around like this. With all the controls on you can look like a real expert just as readily as if you turn them all off you look like a blithering idiot!. 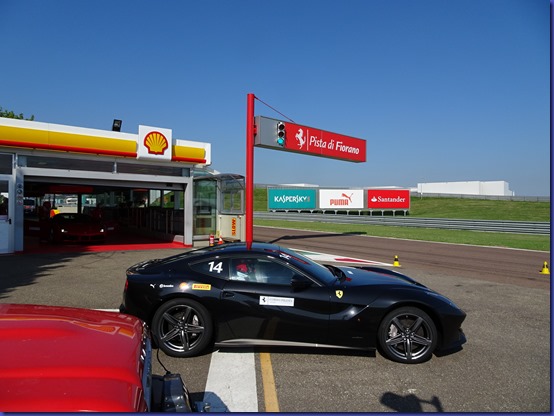 All too soon the skid pan session was over and it was back again to the main track to bang in some more laps before lunch. Like I said previously, you really do get a lot of laps with the course.

We then adjourned for a hot Italian lunch again washed down with coffee. 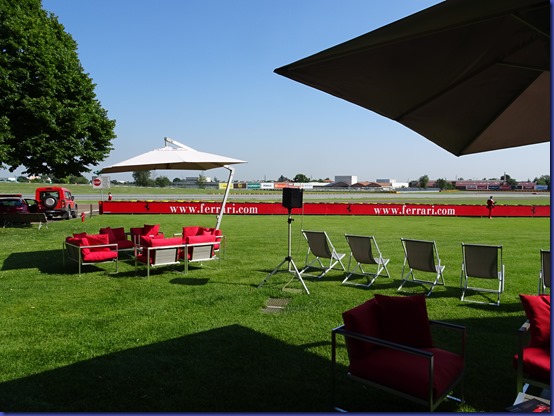 Many took the opportunity to also grab a bit of shut eye and look out across the track before the action kicked off again. 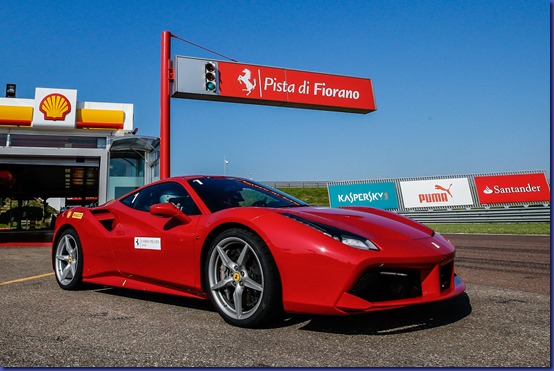 We were soon back on the track but this time our lap would be recorded via telemetry. Again, I’ll post this up at a later date but it compares you against a instructor so you can exactly what you are doing incorrectly. 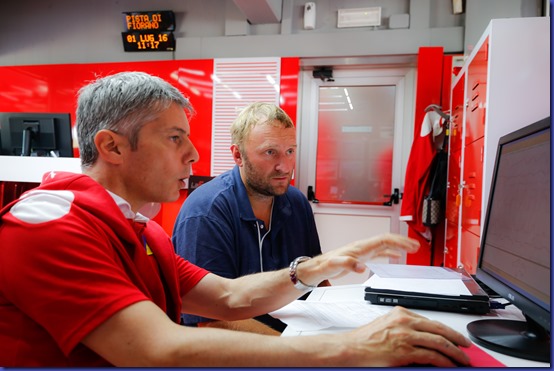 It probably would have been much better if they didn’t tell us that they would be recording the whole laps. Chances are I would have made less mistakes. As it was I muffed up the gears and ended up in higher gear that I should have around a number of corners. Damm you paddle shift!

After the telemetry session you are able to sit down with an instructor a look at the exact results compared with an instructor. You can see where you got it right and where you got it wrong. For me still, the biggest issue was not breaking hard enough at the approach to a corner. More work to be done there, however I did feel that I was getting better through the hairpin which was my bogey point on the track.

We now had a quick announcement that our last sessions were here and the instructors we going to take a much more passive role in the car to see how we did without instruction. 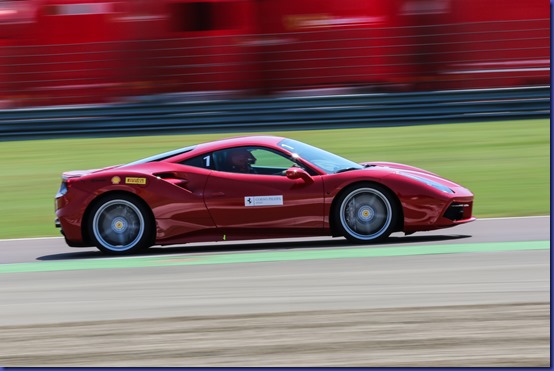 Although probably not exactly ‘correct’ I did feel I performed well in these last sessions. Still plenty to work on, but I was around all the corners much better and my braking into each had certainly improved. My instructors were also happy with my progress which is a reassuring thumbs up and confidence boost for me after having to overcome many self imposed mental barriers initially.

My instructors did comment that I did much better on these final laps compared to the telemetry laps. Just shows you how a little pressure can cause you to stuff things up just when you think you have it all together. Heaven knows how race drivers do this sort of stuff. 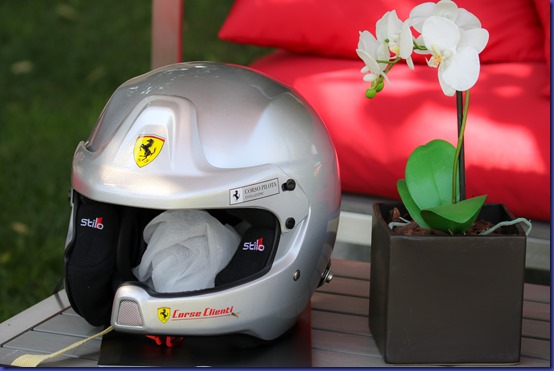 No sooner had it started, then it was over. We handed in our helmets, gathered our gear and headed to the briefing room for the round up and presentations.

Everyone received a certificate of completion and a memory stick with photos, videos and more. We said good bye and thanks to the instructors and the Ferrari staff who had made this event so memorable. We bade farewell to new friends as some boarded the bus, others drove away in the own cars or via other arrangements.

As the bus pulled away from Fiorano, it was sad that it was all over but I felt a sense of accomplishment in leaving with more skill than when I arrived. Combine that with the unique experience of driving these cars in way that you are unlikely to ever be able to do elsewhere and there was a contentment knowing that these were two very special days in your life.

Upon arrival at the hotel it was time to grab some well earned shut eye and start saving for the return trip to Fiorano as soon as possible.