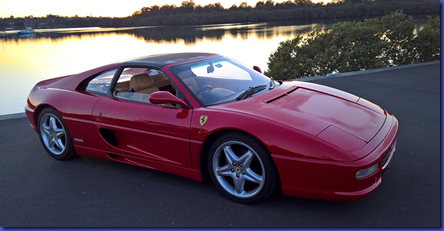 It’s been a while between now so it is time to do an update and share the latest news with the F355.

Let’s deal with the bad news first, which means there will probably be more regular updates now. After many months for running flawlessly the F355 now won’t start! The ignition comes on but the engine won’t crank. This problem started to develop over the past few weeks where I’d turn the key and nothing would happen. However, after a few moments the car would fire. Over time, the delays to it actually cranking were becoming longer and longer, until today when no matter what I tried the car wouldn’t fire up.

At first I thought that maybe it was the immobilizer but after a brief email chat with Sal DiMauro from Racing Red it seems it maybe the starter solenoid. Either way, not being able to fire the car up could be a real pain as where it is currently parked is not the most accessible location. However, as always, the situation could have been worse if I stop and think about it. Imagine if I had stopped for petrol somewhere and then the car refused to fire up there? So having it not fire up at home is a small mercy I suppose.

I’ll have to wait and see what Sal DiMauro from Racing Red suggest to get the car at least drivable so it can be looked at closer.

So with the bad news out of the way let’s turn the annual update.

The car recently passed its five year anniversary with me. If you want to review the previous anniversaries then check them out here:

The fifth year anniversary is wood so they say.

The only major component that needed replacing this was another thermocouple ECU for around $440. The car had started to get the annoying 5-8 Slow Down light on a more regular basis, so after it became almost constant I replaced the ECU and the problem went away. I had replaced the actual thermocouple last year but clearly the ECU also needed to be changed. So now both the thermocouples and ECUs have been changed out and hopefully will be good for at leats another 20 years!

The biggest percentage cost increase for the year was for a green slip. This jumped a whopping 55%. I did some comparisons, and it turns out that I am still paying the average for these cars. I could however, get no acceptable answer from the insurance company as to why the costs had jumped so dramatically. Let’s hope it is a once off hike. Time will tell.

With a low incidence of repairs, I managed to lift the distance driven by the car this year to over 7,300 kilometres which was a 23% increase over last year which was about what I’ve averaged annual over the past five years. However, all that driving did take me across a major milestone. Around the 67,000 kilometre mark I crossed the point at which I have put more kilometres on the car than ALL the previous owners combined. Thus, in the last 5 years I have done more kilometres in the car than car did in its previous 16!.

Overall, total costs were down about 25% to around $7,500 from last year and probably the cheapest they have been since I have owned the car. Aside from the current non-starting issue I have at the moment, this year’s maintenance bill will be higher because it is once again time to have the major service done and get the belts changed. I’m also going to need some new tyres. While the engine is out for the belts I’m going to take the opportunity to have the rear bumper fixed after I cracked it a few years ago. All of that is probably going to add up to a fair investment. Hopefully I can roll all that together with getting the car running again in one hit. I’ll report back and let you know when I have more information about the current situation.

1. As always, you can’t continue to own, and more importantly enjoy, a car like this without good back up. As always Sal DiMauro from Racing Red has solved any problem or concern I had with the car. Even now, with the current issues, I’m 100% confident he’ll get this solved and car will be back on the road real soon. If you need help he’s your man.

2. Cheap double sided tape doesn’t last forever! I returned home after a drive and noticed something on ground in the car’s parking spot. Turned out to be the front number plate, which I must have flicked off when I removed the car’s cover. Upon examination I could see that it was in fact only held in place by some cheap double sided tape that was now well past its use by date. I therefore reinstated the number plate in position using screws and premium double sided take for extra insurance. Getting all those points to align during application was challenging but now the front plate is much more securely fastened.

Aside from the current non starting situation, I’ve been somewhat stressed by the oil pressure gauge remaining higher that it should be at times. Now Sal tells me it may just be a bad connection to the gauge but there have been drives when the gauge goes to the maximum of 10+ PSI and stays there for the whole trip, even at idle.

I did check the oil and water levels and they seemed good. Of late, the pressure gauge has stayed within normal operating limits but it still catch my eye when I’m driving.

The good ol’ 5-8 slow down warning and cut out is always a pain. The worse occurrence happened early in the morning on my way to the Bathurst 12 hour. It happened because I got caught in a traffic jam on the freeway at 6am! Go figure. I put up with the cut outs for a little while longer before I decided that they weren’t going away and replaced the part. The good thing is with the replacement is that if there is one things I’ve had a lot of experience with on this car, it is fixing thermocouple ECU issues!

I’ve also had the usual bangs and scrapes of the nose which is annoying. Speed bumps and steep driveways are generally the culprits, most of which you can’t spot readily from the drivers seat. It always sounds much worse than it is, but it is still like a dagger in the back when it happens.

Another annoying thing is that the screws that hold in the roof clips regularly work their way loose. This is no doubt because of all the bumps and jarring suffered by the car on the poor local roads. You just need to remember to tighten the screws regularly or else they drop out while you are driving along, which can be very distracting when you try and find where they have gone in the cabin.

A largely maintenance free year, with lower ownership costs. That has mean I’ve got a lot of driving in for the year which is why I bought the car in the first place. There is nothing like taking the car out early on a Sunday, doing a complete drive, no stops and returning before most people are even awake. Makes a great way to kick off a week.

All in all a great year for driving the car. Although this is currently tainted somewhat with the current non-starting issues I will admit.

I will admit that I haven’t kept an eye on prices that much in the last twelve months. Doing so takes a lot of time and effort, unfortunately I haven’t had a lot spare to devote to the tasks.

However, as I look at the market today I feel that the car at worst, has retained it’s value and at best has increased maybe 10 – 20%. I think once I sort out a few issues with my car, like the cracked bumper, I would expect the value to increase. There are still things that need to be done to the car to continue to improve its value but they aren’t that major. So all in all, once the belt service has been done, the cracked bumper fixed, new tyres and the current non starting issue solved the car would be at its current peak resale value I feel. Not that I’m contemplating selling, but at that point all the major issues have been taken car of.

So at the moment the car is as broken as it’s ever been unfortunately. In short, it won’t crank which is frustrating and in someway taints this trip down the memory lane. However, that aside, the last 12 months have been very enjoyable F355 motoring. Driving time was up and costs were down so I really can’t complain at all.

The next 12 months will see a major service with the belts being changed, new tyres and hopefully the cracked bumper finally properly repaired. With all that done and the car back on the road, I’ll be a happy camper.

There may also be another opportunity for a trip to the land of Ferrari coming in 2018 but I’ll share more details on that as it gets close.

Until then, thanks for following along and roll on year six of ownership.