It’s been a few months since my last update, but life has been busy. However, here’s the latest.

In my last post I mentioned how the F355 wouldn’t crank and I initially thought it might have been something to do with the immobilizer. Being static, Sal DiMauro from Racing Red had to attend and troubleshoot the issues for me.

After some diagnostics, the fault was isolated to the starter motor. That meant that it needed to be removed for re-conditioning. There was some concern that this wouldn’t be easy given where the car was, but after removing enough parts, Sal was able to extract the starter motor and take it away for a service.

About two weeks later, Sal returned with the re-conditioned starter motor and re-installed it. The car then fired right up and I took it out for a long drive immediately as the battery was beginning to run down.

With the run complete, I tucked the car away in the hope that everything was now fixed.

Over the next few weekends the car started ok but I felt that there was still a delay upon turning the key before the car fired up. This was more likely my imagination than anything, but it wasn’t serious enough to warrant another visit from Sal. That could wait until the major service in December.

One of the things that freaks people out about the F355 is that every three years the engine needs to be dropped out of the car to change the timings belts. This is purely and simply because of the way the engine is mounted, these belts are effectively just behind the driver, hard up against the firewall. So the only way to change them is to drop the engine out.

The belts need to be changed every three years or so and this was to be the second time that I had it done. You can read about the first time here:

My car has no engine

There were a few other items that needed to be done at the same time including:

One of the things you notice very quickly in the F355 in the wet, is when there needs to be more tread on the tyres. A few weeks before the service I was driving along the freeway in the belting rain when the car decided to do some aquaplaning. No fun at those speeds. Thus, time for 2 new rear tyres. The front two where still in good nick luckily, with lots of tread.

About 3 years ago I carelessly reversed the car into a street sign and cracked the bumper:

I’d attempted to fix the issue myself and had some initial success:

However, over the years the paint that I had applied had changed colour and started to really stand out. I then decided to machine polish the area to remove/blend this disparity but that had revealed the initial scar. I left the scar knowing that I would deal with it at the next major service, however seeing the mark every time I drove the car really sent me bonkers I’ll tell you. I honestly couldn’t wait to get it fixed.

The oil pressure gauge had also been jumping around of late. One week it was high, the next low. So I added that to the list of things to get Sal to check for me.

So with the appointment booked I drove the car through suburban traffic in the middle of the day to Sal’s new location. No dramas ,but it is so frustrating to be seemly constantly stuck in traffic but I arrived in good order and handed over to the doctor. 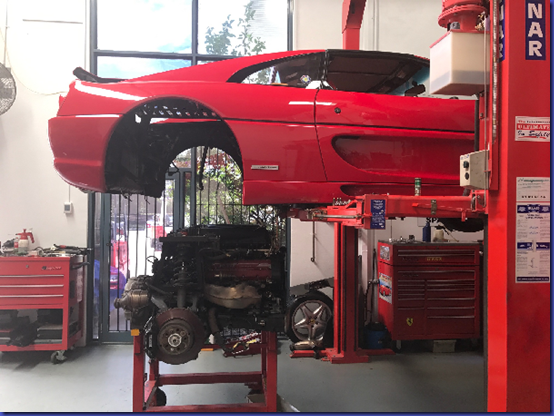 Such a major service, combined with the other items was going to take about a week to complete and when I checked in with Sal he said all was going well but that ceramic lining of my catalytic converters was on the way out and would need to be replaced at some time in the near future. Not immediately, but somewhere down the track. 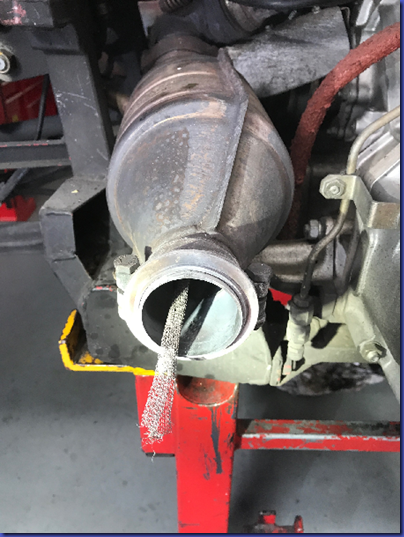 So, new “genuine” Ferrari catalytic converters would cost about $6,000 or the pair but “after market” high flow ones would not be more than $3,000. At this stage I’m leaning to the “after market” versions but I don;t need to make a decision just now, although I think I probably look at getting these changed at the next major service in 12 months.

I’ll know when the existing converters start to fail because pieces of the ceramic will break off and I’ll hear a rattling in the exhaust. Interestingly, the new converters are all metal, so once updated, this problem should disappear. 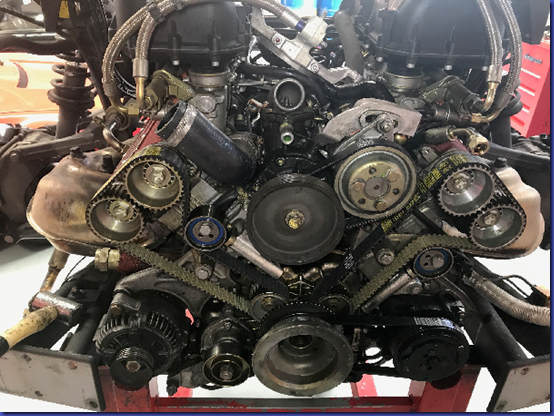 Above, you can see all the belts that need to be changed. Due to the orientation of the engine, these sit next to the firewall facing the front of the car. As you can appreciate, an engine out is really the only option to change these.

The F355 has been designed to facilitate an engine out so it isn’t really a huge drama. Having the engine out also make it much easier to work on and get an all around picture of what’s going on and find any issues that might be missed if it remained in the car permanently. So, there are lots of good reasons why an engine out on the F355 is a good thing but it is simply part of the servicing requirements of the car. Thus, if you are going to invest in a F355 keep this in mind. The people that get freaked out are those who but a F355 and don’t do their homework and get a nasty shock when they are told the engine needs to come out every three years during a major service. 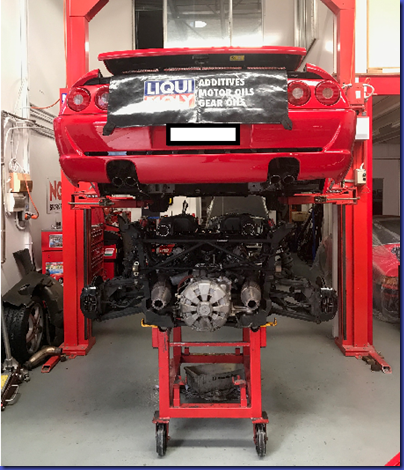 So after about a week I made my way back to Sal’s workshop and picked up the car. They’d done such an amazing job on the rear bumper, fixing the crack, that I didn’t even notice it! There was no evidence of the abuse I had inflicted. I had two new rear tyres and the problem with the oil pressure gauge was a loose connection.

Rather than scything through suburbia, I took the long way home via the freeway to stretch the car’s legs. I gotta say that the car now feels really strong, really strong which is very pleasing.

I’ve now had the opportunity to drive the car on a few weekends and it was performed really, really well and I am ecstatic with how it performs. I’ve also taken the opportunity to fully wash, machine polish and details the car which takes quite a few hours to complete but is something I really enjoy.

With that, the car is home, fully serviced, fully detailed and ready for 2018! The next big trip will be in early February to the Bathurst 12 hour. Another happy year with the F355.