Today was to be our first complete day of stages, morning and afternoon, so we needed our energy and as such, most people were at breakfast early, with many still babbling about the prior day’s experiences. 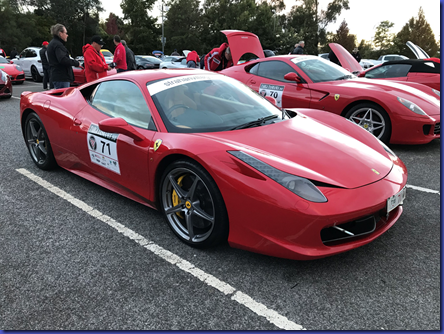 We excitedly headed down to the car park where we were again greeted by a clear but extremely crisp morning. We completed our last minute briefing for the day, grabbed our radios, got our stage notes out, passed the breathalyser and once again headed off across Tasmania to our first Targa stage.

High Plains was our first challenge, about a 40 minute road trip from the Country Club. This stage is about 6 kms in length.

After High Plains we needed to travel about 50 minutes to the next stage, Sheffield. 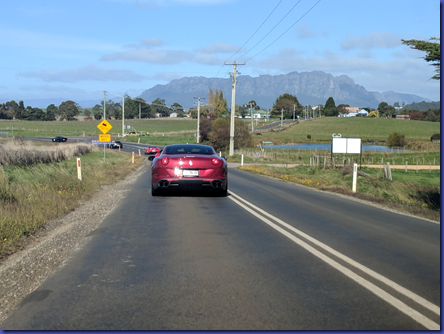 As you can see, there is no shortage of scenery to look at while driving in Tasmania. Once again, the weather was magic, fine and clear.

I had also made a bit a discovery for myself while navigating during the rip roaring tour stages. I found that if I pushed my head firmly into the head rest I could read the notes and see the trip counter without becoming as motion sick. I think if I looked forward during the stages I would have been fine, but looking down, trying to read stage notes and then looking back up does not do one’s stomach well. Seems to me that you either look down at the course notes for the entirety of the stage or you look forward. 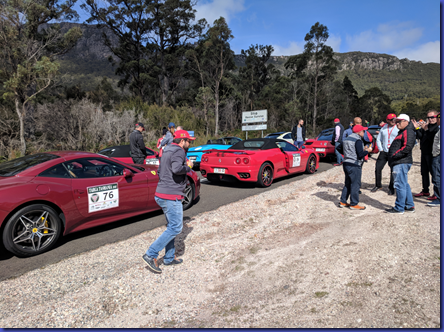 Sheffield is about 15 kms in length and starts with an uphill run. When we arrived the group in front of us were yet to start so we parked alongside and as usual, drivers and passengers, made a beeline for the bushed to help irrigate the local fauna.

As we stood around shivering and stamping our feet to ward away the cold of mid-morning Tasmania we were joined by a few locals, who were keen to check out the cars. 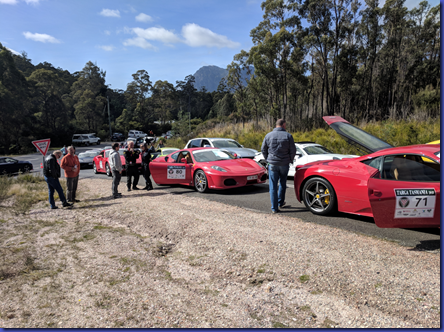 Another amazing sight we became accustom to down here is that fact that while we felt it was freezing and surely about to snow, the locals were getting around in shorts, thongs and T-shirts! They’re a hearty bunch down here.

Soon the group in front of us mounted up and rolled towards the start. As they took off from the start and headed up the mountain we could hear the roar of their engines and that made us all even more excited. 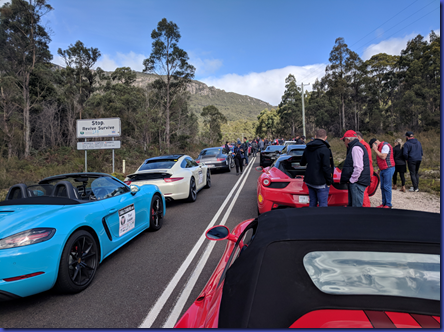 Soon, it was our turn to tackle the uphill climb which was very different from most of the previous stages.

It was at about this point during the tour that I confirmed my growing admiration for the ol’ 458. It is an absolutely AMAZING car. Not only is it quick, it accelerates, brakes and handles beautifully. In short, I want one!

The above video will give you some idea of what it was like during the climb. Don’t forget, that Targa is conducted on closed roads so you don’t have to worry about traffic (read logging trucks) coming the other way. Travelling at speed across double lines, around blind corners, what can I say? Gold bless Tasmania!

From Sheffield we had a short drive of only about 15 minutes to the next stage, Nook.

We now headed for lunch at Latrobe. 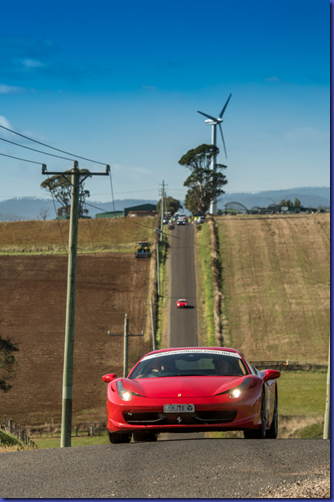 Moriarty was the next stage after lunch, about a 15 minute drive from lunch. There was no time to ‘dilly-dally’ we had to be off at an exact time, directly behind the group in front. Stragglers would be left behind.

Moriarty is about 5.6 kms long.

Next up was Paloona, about 25 minutes away which was a 17 kms stage with plenty of twisty bits and tight corners. 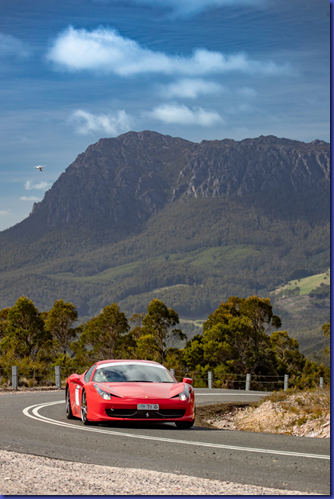 Mt Roland was next up, about 30 minutes away. This was one of the longer stages at 27 kms and basically starts with a hill climb, goes across a plateau and then down the other side. 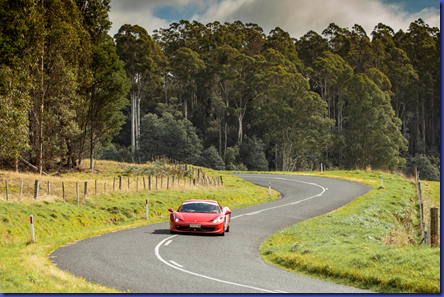 Mt Roland was our sixth and final Targa stage for the day. With the trip back to the Country Club, that would make fourteen driving stages in all up, over 350 kms for the day.

We regrouped at the end of the stage and confirmed plans for dinner tonight in Launceston at the Mud Bar Restaurant.

My driver and I swapped seats and I sedately headed back to the Country Club to rest and refresh before dinner.

Day 2 had been bigger, better and longer than day 1 and everyone was much more exhausted once the adrenaline had subsided. Today we’d taken on our first real mountain stage, both up and down, which was really special. We’d also had challenging twists and turns as well as flying straights. Everyone was really grateful that they’d made the time to come and looked forward to an even earlier start tomorrow for another full day of Targa Tasmania.