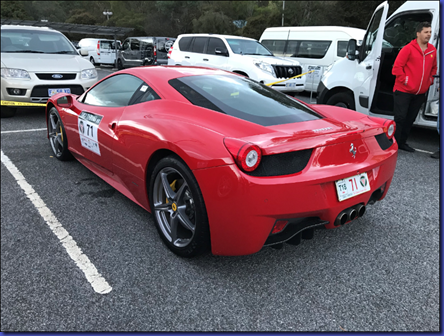 Another crisp but clear Tasmanian morning greeted us on day 3 of Targa. We were up even earlier today for another full day of stages. Although everyone was keen for the off again, these early starts were not what many had in mind when they signed up, was a common conversation point as people shivered in the early dawn. However, everyone was keen for another full day of driving as we received our daily briefing and mounted up for the day. 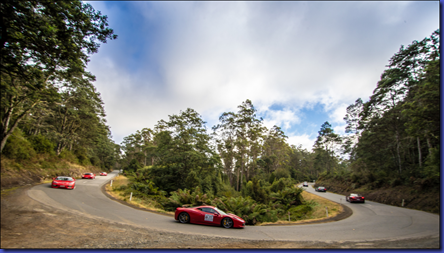 Our first stage, The Sideling was about a 40 minute drive from the Country Club. The Sideling is a 14 km stage. 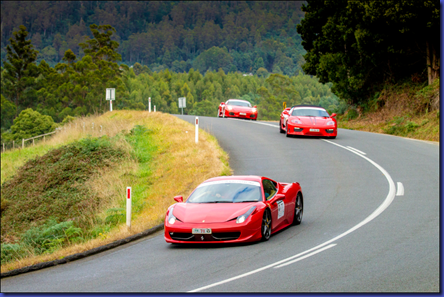 We then headed to Moorina about 50 minutes away. Moorina is stage that is all up hill. It was hill climb time and the 458 didn’t disappoint.

Only 3 minutes away was the Wedlborough Pass a 14 km stage which included a long descent down the mountain, which was not something we had really seen as yet. This did take some adjustment and braking as we wound down the mountain. 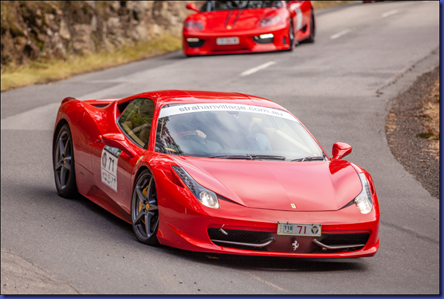 Next up, Pyengana, only a few minutes away. 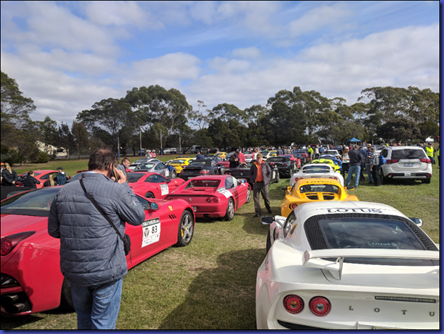 From here we headed to St Helens for the lunch break. We parked up on a local football field and headed off to enjoy some refreshments. 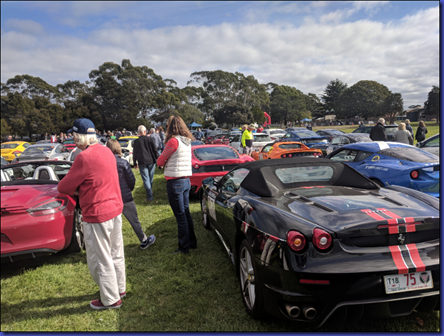 As I have said previously, it is truly amazing the support this event enjoys with locals, none more so than here at St Helens. While waiting for the group in front of us to leave we were blown away with the number of locals who had come to look at the cars. They were all really keen to learn more about us and the cars. It was truly gratifying to see how enthusiastic they were about Targa going through their neck of the woods and the support they give competitors like us.

We then had about a 45 minute drive to the next stage, Elephant Pass. 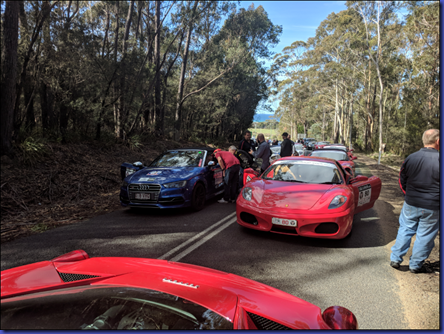 This is the most famous East Coast pass of Targa. It is about 11 km long with plenty of challenging driving conditions starting with a hill climb and finishing with a hill descent. 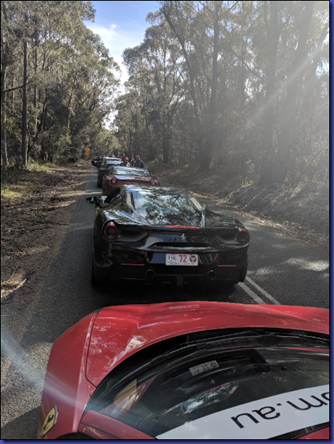 We had an usually long wait before we commenced the stage. This was great as it again allowed us to take in the fantastic scenery and catch up with others.

Elephant Pass was probably the most enjoyable stage I found in that it included both a hill climb and descent, while also having a combination of twists and straights all combined with some spectacular scenery.

With Elephant Pass complete we now headed along normal roads for 50 minutes to the Rossarden stage.

Once again this stage was through the mountains both up, but mainly down a mountain. It was a real rare treat to be able to drive these mountain roads at speed.

At the end of the stage we were greeted with with about 5kms of unsealed gravel road, which had a different effect on different drivers. Some, tried to ‘tip toe’ through the never ending ‘crunching’ gravel in the vain hope of limiting the damage to their car. Others, like my driver, took it as an opportunity for a ‘real’ rally stage by doing fishtails, slides, launches, emergency stops and more. For a few, like my driver, it was a prefect way to finish the day and you couldn’t wipe the grin off their faces.

I once again was given the controls of the 458 and we headed back to the Country Club. The return trip was over 90 minutes so it was great to get an extend time behind the wheel of the 458 which had seen quite a bit of action on day 3. Many a time the car had bottomed or ‘nosed out’ when travelling a speed down the mountain, but once again it had performed flawlessly. It truly is an amazing piece of machinery.

Today we’d done over 380 kms through Tasmania and was unfortunately our last full day on Targa a fact we lamented on over dinner at Cataract on Paterson in Launceston after freshening up before heading out. Tomorrow would again be an early and we’d also need to check out as well so we chose to make an early evening of it and get a back to our accommodation early.

Today, for me, was probably the best day on tour. We completed stages that really had everything and were truly characteristic of this wonderful place. The car and my driver performed flawlessly and we had some great times between stages. I don’t think it could get much better than this!