So after detailing what the ‘experience’ is of driving Fiorano now it is time to get down to brass tacks and take a closer look at what I learned about my driving ability (or inability) and what more I need to learn. 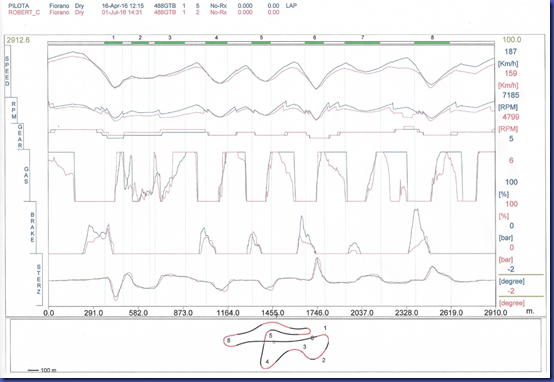 The first place to start is the telemetry output which you can see above. You can click on the image to get more detail if you want. The red line in the above telemetry is my performance, while the blue line is the benchmark level set by an instructor in the same car (488 GTB).

There are two caveats here. Firstly, towards the end of the lap (turns 7 and 8) I was coming up behind a slower car so needed to back off. Secondly, thanks to my inexperience using the paddle shift I ended up in one gear higher that I should. So with that in mind let’s take a deeper dive into my actual performance on this ‘monitored’ lap. 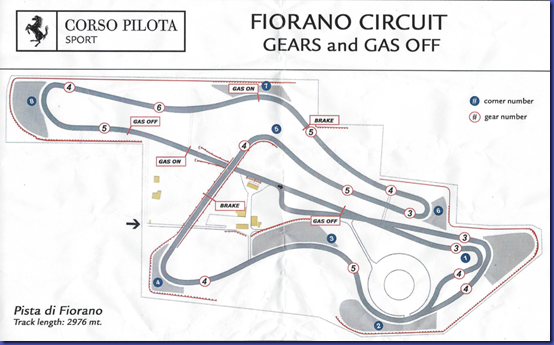 To get a better idea of the track layout and importantly, the correct gearing for each corner, you’ll see the track above. You can click on the image for more detail if you need to. 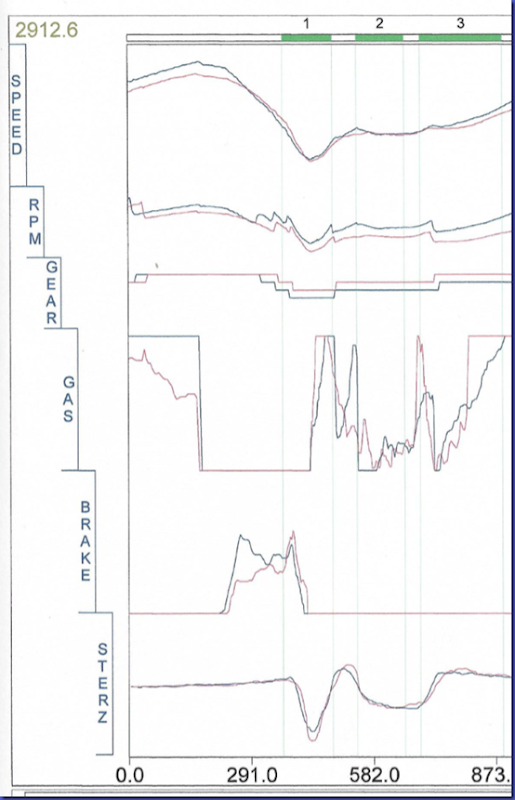 So down the straight into corner 1 you can see that my speed here is slightly lower that the benchmark but comparable and I’m in the right gear. The main issue is that I am not on the gas hard enough down the straight, which explains the lower speed. 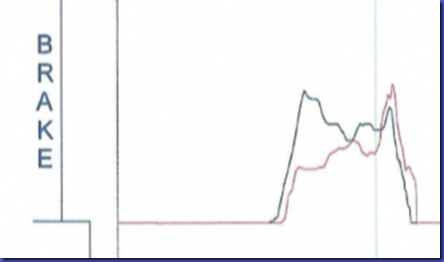 Now the major problem, for me, is the braking. I am not on the brakes hard enough entering at the end of the straight entering corner 1. This was a problem I struggled with for the whole course. It is very counter intuitive to the way the you drive on the street. On the track you need to be hard (very hard in fact, to the point of the ABS cutting in) immediately and then ease off as you get deeper into the corner.

If you also look at the gearing approaching this corner, you’ll see that I shift down too late and two gears instead of three. That now means, of course, that my mental gear numbering is out by one (too high). This affects me through the next few corners.

The speed through corners 2 and 3 is in line with the base but I don’t maintain that going into turn 4.

Approaching turn 4 I’m still in a gear too high due to my earlier oversight.

Once again, I am not braking soon enough or hard enough into corner 4 (the second sets of peaks on the right above).

Turn 5 braking isn’t too bad but where you see the issues I have with not braking hard enough is into the first hairpin, turn 5. As you can see from the right most output my braking (red) is way under the benchmark (blue). Thus, I carry too much speed into the corner, which means I end up turning the wheel for longer and this losing speed out of the corner. As I still hear ringing in my ears from instructors. Bake, brake, brake, keep braking, harder braking….

It is around this point that I start to catch the other car so have to back off while a safe overtake is organised by my instructor. This fact kind of throws out the rest of the lap as a comparison to the benchmark.

The lap could have been better but it was certainly a big improvement from my initial laps. Apart from changing my braking style to suit the track the other real challenge I found was simply the sheer amount of things I needed to think about approaching a corner. I had to discipline myself to break early and hard. I had to manage what gear I was in. I needed to continue to brake longer into the corner for a late entry, faster exit. After breaking I needed to release and kiss the apex and then that point apply the power while looking ahead to the next turn. That a lot to think about for simpleton like me!

Not having done a huge amount of track time as well as being in very different car from my own ‘vintage’ model, all of this combined was challenging to say the least. I think that the more time behind the wheel I got the better and would have been nice to do some longer stints to really reinforce some of the lessons I was trying to learn.

It is however very interesting to see what a handy tool telemetry like this to help you work out what you need to improve. It’s all there in black and white (well red and blue in this case, but you get the idea).

However, in the end I learned a huge amount, made progress and was challenged by the whole experience while really enjoying the whole course (once I got over the initial jitters). Hopefully, that is reflected in these in car videos from the last few runs in both cars.

As a further illustration here’s the video out from the Vbox monitoring set up (telemetry, video, etc) that was also incorporated in the car and made available to everyone:

and of course we want the identity of the driver here to remain hidden to protect the guilty.

It is again interesting for me to review these videos now as I see all sorts of things that I could correct to improve. Oh so many….Next time. Next time for sure.

The one aspect of my driving that I didn’t need to really worry about was the line and layout of the track. That is no doubt thanks to the ‘investment’ I made for 6 month prior driving the track on my Xbox! Driving simulators do really help as it turns out. So the lesson from that is to go out and get an Xbox if you want to improve your performance on the track when you can’t be on the track!

The end result is that there is still much to learn and for that more track time clearly is required. That’s probably the toughest (and most frustrating) aspect of all this. In that, (being rather competitive), you want to go out and start fixing your issues so you don’t feel or perform like a ham fisted moron behind the wheel. Even more incentive to look at doing another Corso Pilota I suppose. Don’t worry, the planning is already in progress for a return visit.